A private concert for The Ark in Ann Arbor, with After Party featuring a living legend and a future living legend 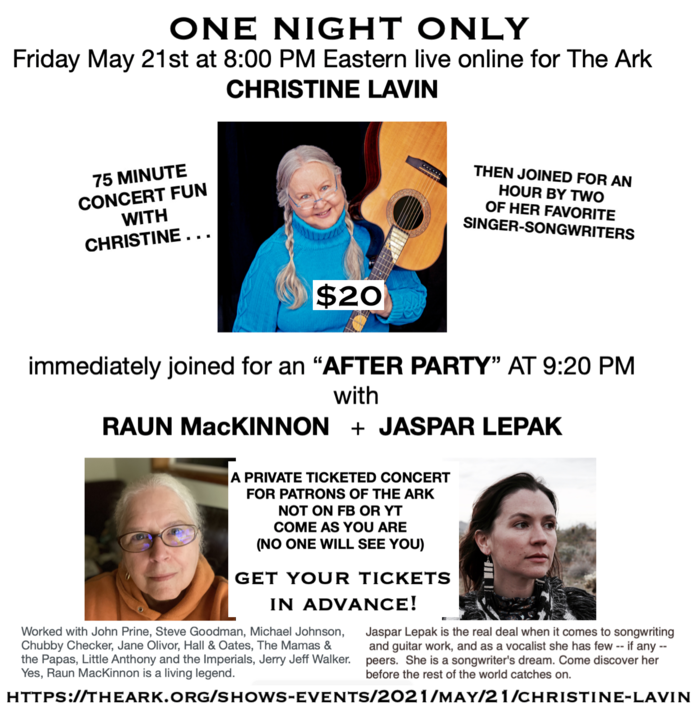 On Friday May 21st I'm doing a solo concert from 8 - 9:15 PM Eastern time, immediately followed by an After Party that will feature Raun MacKinnon, whose 1968 album HER NAME IS RAUN! established her as a force to be reckoned with, also featuring Jaspar Lepak, who is one of the best up and coming singer/songwriters in the country. Raun and Jaspar both live in the Pacific NW of the US and have never met, so this is my way of introducing them to each other and to you. Here's a sampling:

I'll be doing new songs and old songs in my concert, then a song-swap with Raun and Jaspar. And let me know if you'd like a napkin folding lesson -- I can always throw one in. I also have a couple of surprises planned, too, but I can't tell you or they wouldn't be surprises.

I asked Raun what I should say about her and she wrote, "Raun spends her waking hours communing with the moonfairies. She lives in splendid isolation in the Pacific Northwest with her faithful companion, Jerry. They emerge periodically to grace the world with their magnificent presence."
** but here's what you should REALLY say:
"Raun MacKinnon Burnham is enjoying retirement. She writes, sings, plays and occasionally records, but spends most of her musical time these days singing alto and tenor in two choirs, Amabile Choir of Bainbridge and Singers Without Borders."
Jaspar Lepak has a stellar reputation and a gorgeous voice -- I know you will love her, too.