Pop-up concert at 9 PM Eastern, After Party with Vance Gilbert and Cynthia Carle right after 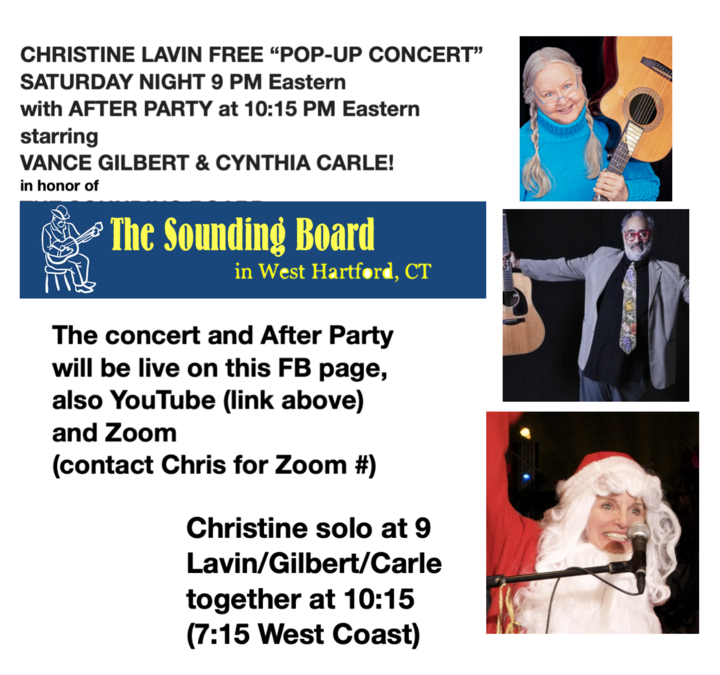 Well, here's a modern problem -- I had a concet on my schedule for Saturday night -- assumed it was a virtual zoom concert only to discover it was booked months ago, was a live concert, and was canceled months ago. So I said to the promoter, "Don't you do virtual concerts?" and they said "No, we never have," so I said, "Well let's do one!" and then they said OK (all this happened on Thursday).

So then I asked Vance Gilbert if he'd be a guest in the After Party and he said yes. So then I asked Cynthia Carle, one of the best kept secrets in songwriting in LA and she said YES. Vance and Cynthia have never met. So we'll do a song swap til 11 PM. It's all free and will be a lot of fun and now The Sounding Board in West Hartford, CT can say they've jumped into the world of virtual concerts with both feet. Plus I have a brand new microphone and mixer, so I'm upping my tech game, too.

If you don't know Vance Gilbert, someone said, "If Joni Mitchell and Richie Havens had a love child, and Rodney Dangerfield was the midwife, Vance Gilbert would be the result."

And if you don't know Cynthia Carle, when I first heard her music I thought, "Thank God I'm beyond the age of envy!" She's as wry and clever as they come.

I'll be doing songs from my very first album (1981) and my latest album (2020) and maybe throw in a napkin folding lesson in between to get you ready for Thanksgiving.

We all need a break -- come take one tonight! BYOB.

Zoom
The Sounding Board presents Christine Lavin with Vance Gilbert and Cynthia Carle in the After Party
Time: Nov 21, 2020 09:00 PM Eastern Time (US and Canada)

Please do not post the Zoom coordinates in public. The Zoom audience is by invitation only, and we don't want any zoom bomb attacks. If you are in the Zoom audience we hope you will turn your camera on so we can see your shining face. YouTube and FB can't see you, but the performers will.

Also let me know if you have a request and/or dedication. Already one audience member is celebrating her birthday AND her and her husband's wedding anniversary -- so it will be a real party, especially if you pop champagne during the show.