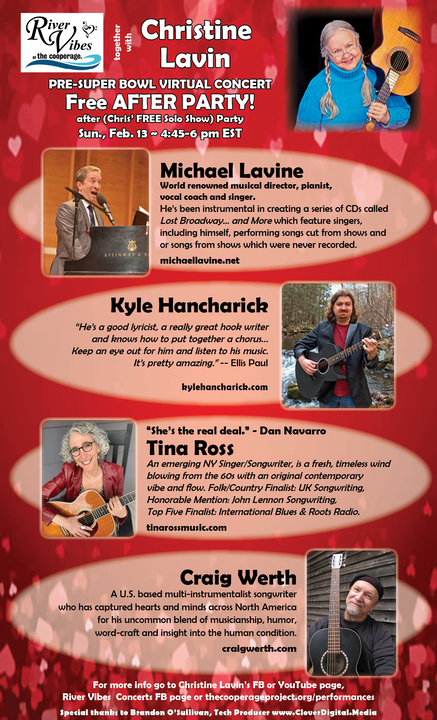 My After Party guests are:

The internationally renowned Michael Lavine who travels the globe coaching singers, directing shows, and running workshops when he's not coaching Broadway performers here in NYC. He's a new friend who is fun and gregarious and owns one of the largest sheet music collections in the world. For fans of the TV show, "Cold Case," he was their music supervisor, always making sure that when they went back in time when solving crimes that the absolute correct music came out of the radios at all times. Have any questions about Marvin Hamlisch or Chita Rivera? He'll have the answers.

Kyle Hancharick is a young singer songwriter with a knack for writing the kinds of songs that get into your system and play on a loop in your head -- in a good way. I think he's a superstar in training, and am so happy Michael Lavine is going to meet him at this stage of his career. Kyle has so many wonderful songs, and one of them, "Lucky Man," I'm sure is going to be big hit for some lucky singer. I may have to beg Kyle to sing it -- but I think he will.

Tina Ross has recently given up her medical career to pursue music. She's working on her debut album, and she's got grey hair like me. Thinking of changing careers? Come and watch someone in the midst of doing just that. She possesses a gorgeous voice, plays beautiful guitar, and writes timeless songs, too. I can't wait for her debut album. You'll get to see her before the rest of the world knows her name.

Craig Werth is the author of "These Ornaments," which is one of the songs on "Just One Angel 2.0," a compilation I produced of original holiday songs. And he's recently become a UU minister, so his songs are finding a whole new audience. Craig and I made a video for Pluto's Fly-By a few years back (for Craig's song, "Oh Pluto") -- and we got invited to the big shebang at Johns Hopkins University, so we got to partay with all kinds of astronomers from all over the world. We couldn't believe we were part of a world-wide Pluto partay with all the scientists who did all the heavy lifting. I've been a fan of Craig's for years, and he never told any of those scientists that I got a D in Astronomy, so he's the kind of guy who won't embarrass you, even though he could.

These four don't know each other, so let's hope there's no cat fights. Though how you'd have a cat fight over zoom would be quite a feat.

Oh yes -- the after party is on zoom so you can get to meet each other, too, but my concert will be on Facebook and Youtube, too. Below is the FB link. At the end of my show, if you're good, you'll be given the coordinates that will get you into the after party -- so you'll have to pay attention to the end of the chat. Here's that FB link:

If you just want to go to the After Party, check in to FB (it will also be on YT but I don't have that link yet) -- just log on to either of those near 4:30 EST to get the zoom coordinates. There are only 100 slots for the After Party. I'll see if I can do a newsletter late Sunday morning with the zoom coordinates. You've gotta get some perk being on my newsletter list!  I'll do my best.

During my set I plan to read the part of my memoir about how Joe Namath taught me how to throw a football. I kid you not. I grew up on the grounds of Peekskill Military Academy, where the NYJets trained from 1963 - 1968 in the summer months. I used to love football, but now not so much since we know too much about concussions. But I will always love Joe Namath. Sigh.