The people on Mulberry Street in Rochester, NY thank all essential workers doing their jobs 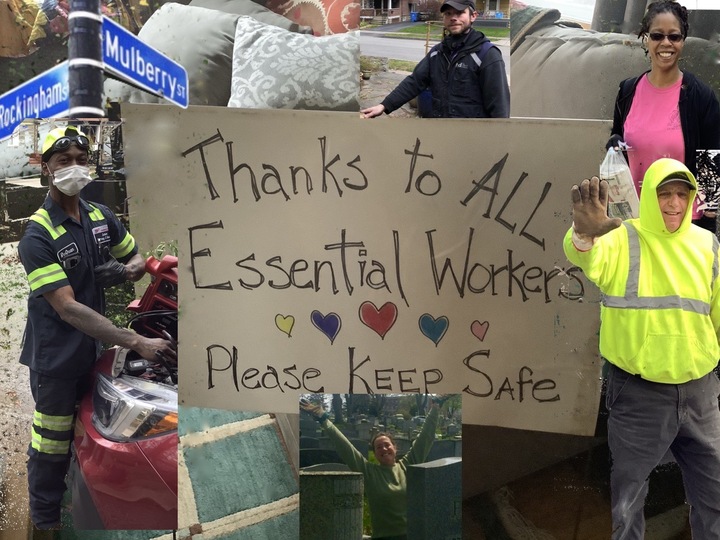 Allan Pepper, who owned The Bottom Line for 30 years, got the idea that someone should make a video honoring all the essential workers who have been working through this pandemic, doing their best to keep life going during these difficult times. He called me one night with this idea, using a song by a friend and asked if I would make a video for it? I listened to the music, but I didn't think the song was quite right -- oh, it was a great song, but a bit too religious in nature. The next day we talked it over and decided it wouldn't work with that particular piece of music.

But in between our initial conversation and deciding it wouldn't work, I had told my sister Mary about it and asked what she thought of the idea and if she liked it, did she have any photos of local essential workers where she lives? The next morning she went out and started taking pictures. So when I called her and said it looked like the idea wasn't going to fly, she was disappointed -- but she loves her neighborhood and would keep taking pictures anyway.

As she sent me photos and short videos over the following days, I saw that this could be a more personal project, just focussing on her street. So then I thought about what kind of music would be appropriate -- an instrumental, but I've only written two in my life, and both are already used in other videos. I wanted it to be something serious and stately --and I realized that I did have a new song that might work.

Back in February my niece asked me to write a wedding march for her wedding -- it doesn't happen until June of 2021, but she plans ahead. I wrote a solo guitar instrumental and when I sent it to her in March, she and her fiance both loved it and asked that I not play it anywhere until that day -- they wanted it to be a surprise for their guests at the wedding. So I had plenty of time to practice -- which I did. I've performed at weddings before, and you've got to play perfectly because, well, it's their wedding day, for God's sake -- a day they will remember always. Play even ONE clam, and someone will have it on video forever. So I started practicing it every day.

My sister Mary kept sending pictures of the street she lives on in Rochester, NY -- Mulberry Street, to be exact. They have a Friday happy hour, a regular potluck supper, and they've been doing this for more than 25 years. Mulberry Street has really become a community. It wasn't long before I realized that the music I wrote for my niece's wedding could work for this video -- but it wanted to be bigger than just a guitar instrumental. So I sent it to a high school viola wizard, Amelia Krinke, asked if she could make it a viola quartet (she said she could), then texted my niece saying that even though I promised no one would hear it until their wedding day, would they consider lending their wedding march to a video honoring essential workers during the pandemic?

She had just sat down to a special birthday dinner she made for her fiance, but you know young people, their phones aren't far away. She read him the text during dinner, and they immediately texted back "YES!" I'm not saying this was part of my plan, but now that the betrothed couple has a recording of their wedding march done by a viola quartet, maybe they'll hire a viola quartet to play their wedding march and I won't have to stress over playing a clam for the next 12 months. I'm just sayin' . . .

Anyway, my sister Mary and I made this video together -- it's just the essential workers who come and go on Mulberry Street, plus the workers at Costco, the store she and her husband makes pilgrimages to every week. I hope it will make you smile and think about the essential workers on your street who keep things humming. Jim Memmott, a columnist at The Democrat & Chronicle in Rochester, highlights our video today. There wasn't room to explain the music, but I wanted you to know.  Everybody wants to pay tribute to the essential workers, even young couples in love: