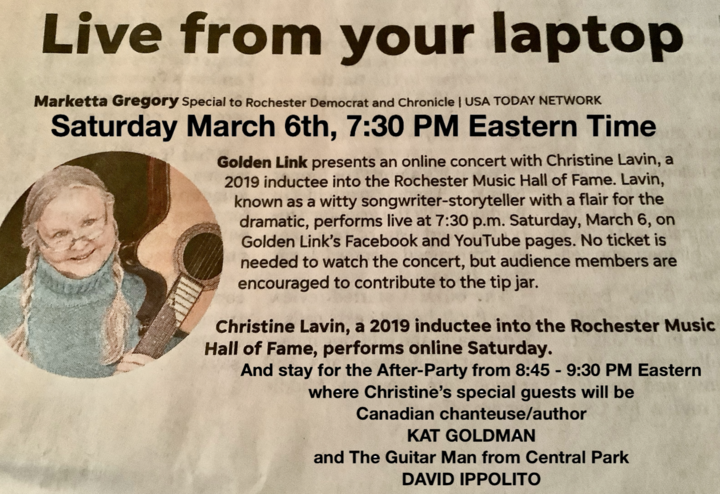 I'm taking requests -- the concert is free -- Kat Goldman has just written her first book: OFF THE CHARTS: WHAT I LEARNED FROM MY ALMOST FABULOUS LIFE IN MUSIC and will read excerpts from it, and David Ippolito, for more than 25 years as That Guitar Man From Central Park, will be sharing music and stories from his fascinating life.

This concert will be streamed live, with a Zoom after-party with Christine doing songs in the round with two special guests: David Ippolito and Kat Goldman. You don’t need a ticket to watch this concert, but we hope that you will contribute something to her tip jar.Golden Link members and friends have the option to participate in the live Zoom session and applaud and laugh along with other participants.

Requests: Want Christine to sing your favorite song? If you have a request or dedication, email it to Christine in advance teeny.lavin@gmail.com. The earlier you put your request/dedication in, the better the chance it can be fulfilled.

Known as “That Guitar Man of Central Park,” David Ippolito has been performing every summer for more than 25 years in Central Park, the only musician who’s ever had that privilege. The New York Times called him “The most famous person in New York… that nobody knows.”

Kat Goldman is one of Canada’s most treasured songwriters. Her songs have been covered by the Grammy-nominated band The Duhks and Dar Williams, among others. She has made four critically acclaimed albums. She has just launched her first book, “OFF THE CHARTS: What I Learned from My Almost Fabulous Life in Music” (Sutherland House Books). She lives in Toronto. for concert Facebook and YouTube streaming links and further information.

IT'S A FREE CONCERT, BUT TIPPING IS FINE -- THOUGH NOT REQUIRED. We are all doing our best to get by during this difficult time, so don't let lack of funds keep you away. Christine's concerts are always FREE.