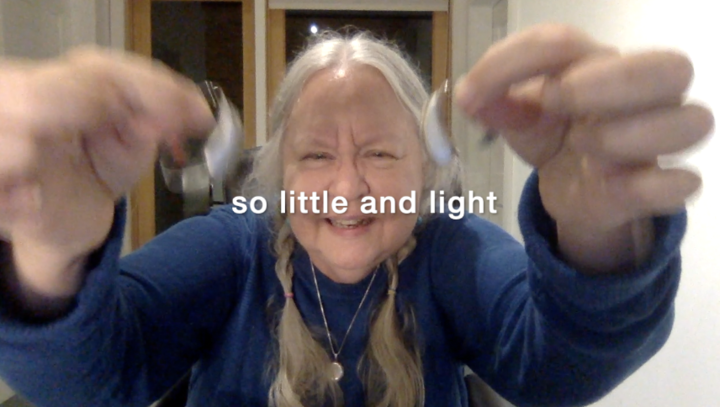 I know hearing loss is a touchy subject -- took me five years to acknowledge mine. If you are someone you know is saying, "Wut?" more often they should, you could send them this song. My audiologist, Dr. Joe Montano, makes a cameo appearance at the very end of the video.

I've been sequestered upstate at the artist colony Yaddo for the past four weeks -- it's been quite an adjustment -- for one thing, I had to run my white noise machine because the silence at night is deafening, and for another, I tried to put a snail out of harm's way, thinking he'd get run over on the gravel path I was walking (where occasional cars and bikes go by) -- only to discover on closer inspection that he was an acorn.  But a brave, free range acorn.

I wrote three songs, completed two videos, and did two performances for fellow residents while here, residents who are artists and writers from all over the world (and attended their readings and art shows in their cabins). I've never been to an artist colony before, never had an opportunity to just focus on creative work without any distractions (except for MSNBC and CNN's reporting on the wild politics we are living through). I also was part of three open mics at the Caffe Lena, so I got to meet some good local musicians, too.

I hope my new song will encourage those who need them to get hearing tests. The first clue that I remember things weren't right with my hearing was watching a rerun of "Law & Order." I thought to myself, "Gee, these shows used to be so well done -- but the sound has gone downhill I guess."  Then at the end I realized it was an episode from 20 years ago.  Uh oh, it wasn't "Law & Order" -- it was ME.

What finally pushed me to get hearing aids is when I was told that there is a new theory that when your hearing is compromised, certain parts of the brain get less stimulation, and then those parts of the brain start to atrophy.  It makes sense if you think about that.  If you even think you might have a problem, I encourage you to get your hearing tested.  Hearing loss is gradual and painless.  Mine isn't terrible, but it was becoming more noticeable. I've been blasted by feedback onstage more times than I can count, which I'm sure didn't help.

As Paul Newman liked to say, "Getting old is not for sissies." So I hope my new song can do some good.