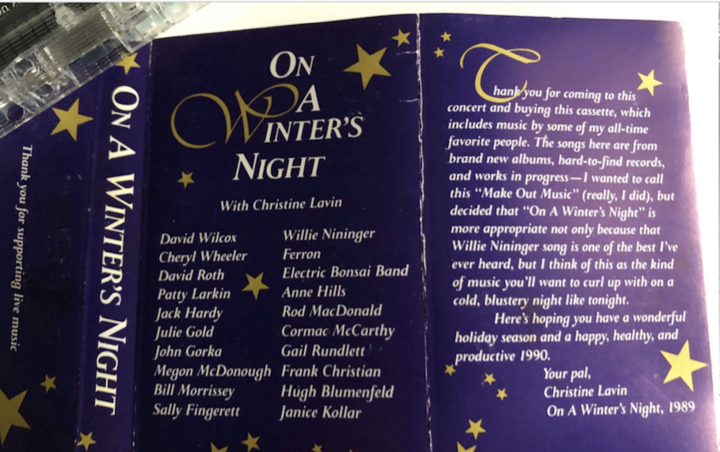 Well, you live long enough in this business and surprising things can happen. The "On A Winter's Night" tour I'm doing with Cliff Eberhardt, John Gorka, Patty Larkin & Cheryl Wheeler starts November 7th. Here's a short video with the details of the first leg:

Amazingly, it's the 25th anniversary tour of the compilation album, "On A Winter's Night," that started out life in 1989 as a 21-artist cassette I put together, inspired by Jack Hardy's "Fast Folk Musical Magazine." In 1990 it was edited down to 15 songs and released by North Star Records (who went out of business a couple years later). Then in 1994 Rounder Records picked it up as a 15 artist CD, but then in 2004 they wanted to do a special "20th anniversary edition" and add a few more tracks (Judy Collins, Dave Van Ronk, Annie Bauerlein & Chip Mergott, Lynn Miles, and Cliff Eberhardt (who wasn't on the original version -- but should have been). So now it's a 20 artist CD.

And now -- 25 years after Rounder first put it out -- we are doing a national tour to celebrate this milestone.

There are dates up through March 2020 (yeah, not exactly winter then) but what the heck. My original idea was that it was makeout music, and makeout music is good any time of year. If you look at the photo above you'll see I'm not kidding about that.

And last night I received some of the nicest ink I have ever gotten in my life. The author is a young journalist in Rochester, NY and he is hoping he'll get a lot of "likes" for it -- so I ask that you read it -- not to read about me -- but to help this young writer achieve his goals in music journalism. I really think he did a good job -- he included a funny anecdote about my mother that always cracks me up when I think about it.

The tour is turning out to be quite a success already -- the March 13 show in Boston only has 30 tickets left in the center section of the theater -- so if this combination of singer/songwriters interests you, don't wait til the last minute.