The debut of a song I've wanted to write for 7 years, the true story of Ervin & Edith Drake will air late afternoon Sunday on WFUV.org between 5:30 - 6 PM Eastern time  - an hour later the online GVFF celebrating Sonny Ochs' 85th birthday! 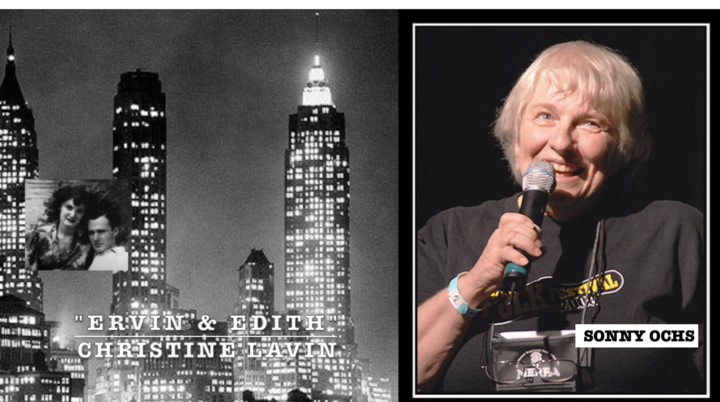 Their love story started in 1945 when he was a struggling songwriter and she was a glamorous showgirl on Broadway. His name was Ervin Drake, who went on to write million selling songs that are still heard today. Her name was Edith Bermaine, a young showgirl. He proposed to her in 1945 and she said NO. She had led a very sheltered life and was now having the time of her life in NYC. That's where the story begins. If you want to know how it ends, tune in to WFUV, 90.7 FM in NYC during "Sunday Supper," hosted by John Platt between 5-6 PM today, Sunday -- though he tells me he plans to play it between 5:30 - 6 PM. April 3rd would have been Ervin's 103rd birthday -- I worked like crazy with Brian Bauers, Ashley Madison Bauers, cellist Anil Melwani, bassist Steve Doyle, and mastering engineer Phillip Klum to have it ready in time for John's show.  We made it just under the wire!

On Monday the video will be on my facebook page, facebook.com/christine.lavin.5

Later starting at 7 PM Eastern is the Sunday April 3rd edition of the Greenwich Village Folk Festival, a free live monthly concert, a gift to the community, opening with Paul Kaplan (he played on my first studio album in 1984 -- I've known him a long time and he's better than ever), and ending with Howard Levy, the multi-instrumentalist genius from Chicago, with many wonderful musicians in between, including Robin Batteau, the Nields, and Tom Prasado-Rao. That will be live on my Facebook page (again facebook.com/christine.lavin.5) and also at greenwichvillagefolkfestival.com. We'll be celebrating Sonny Ochs' 85th birthday the whole time, so join us in wishing her all good things -- she and I will will be co-MCing the GVFF -- another one of the performers, making his debut, is Colombian harpist Edmar Castaneda -- he plays harp like no one you have ever seen. A totally eclectic lineup Sunday night from 7 PM - 10 PM Eastern.