Could We Love Harry Connick Jr More Than We Already Do? 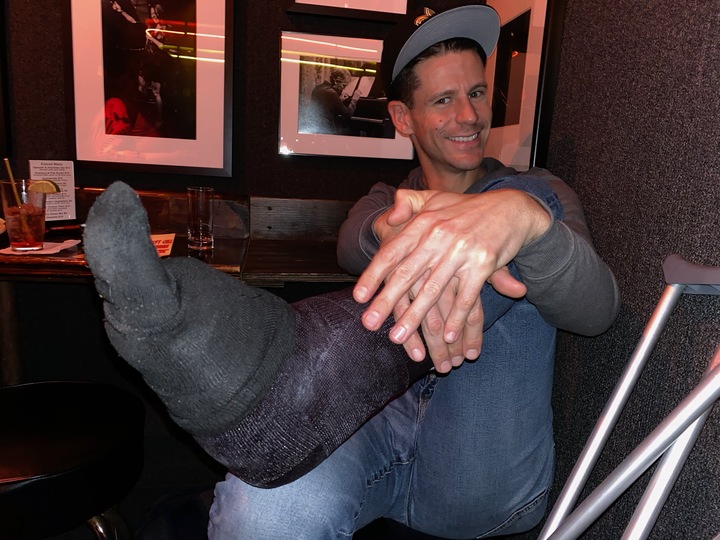 Last night I went to Jim Caruso's Cast Party at Birdland -- hadn't been in quite a long time. Who do I see sitting at the bar? Luke Hawkins, the world class tap dancer. But as soon as I saw him I knew he wouldn't be tapping tonight -- he had a big ole cast on his left foot. He broke his foot falling off a skateboard.

Yes, a skateboard. A world class tap dancer whose main mode of transportation is a skateboard on the streets of New York City. What was he thinking???

He said it was a freak accident -- he also injured his left wrist, but not as badly. All-in-all he was in pretty good spirits, though he said the hardest part was that he was supposed to tap every night in Harry Connick Jr's Broadway show, "A Celebration Of Cole Porter" which runs until December 29th. Not only was he supposed to tap dance, he choreographed the show-stopping number "Begin The Beguine." No chance of that happening with the giant cast on his foot.

But he smiled and said that all was not lost. Harry felt really bad for him -- knowing what a career boost it would have been for him to be showcased in this show. There's a musical number set in a bar, with a bartender standing behind the bar in a New Orleans-style number. Harry insisted Luke play the part of the bartender. No one would see his cast or know his foot is broken -- and he's still making a paycheck and gets to be part of something that is great fun every night (it just opened on the 12th, to glowing reviews -- here's one -- and includes a photo of the lucky tap dancer who filled in for Luke. One man's broken foot is another man's lucky break -- https://www.nytimes.com/2019/12/15/theater/harry-connick-jr-cole-porter-review.html).

In case you are going, I thought you'd like to know that the guy behind the bar was supposed to be the featured tap dancer, and how kind is Harry Connick Jr. to insist he stay in the show? It's like a showbiz Christmas/Hanukah miracle for Luke Hawkins.

You would think that Luke has sworn off skateboarding, but no. He plans to get back on the board once he's all healed. If you know his mom, maybe you can call her to have a serious talk with Luke!