The best new song of 2021 has already been written, "Because We Need You Now" by Cliff Eberhardt & Tom Prasada-Rao 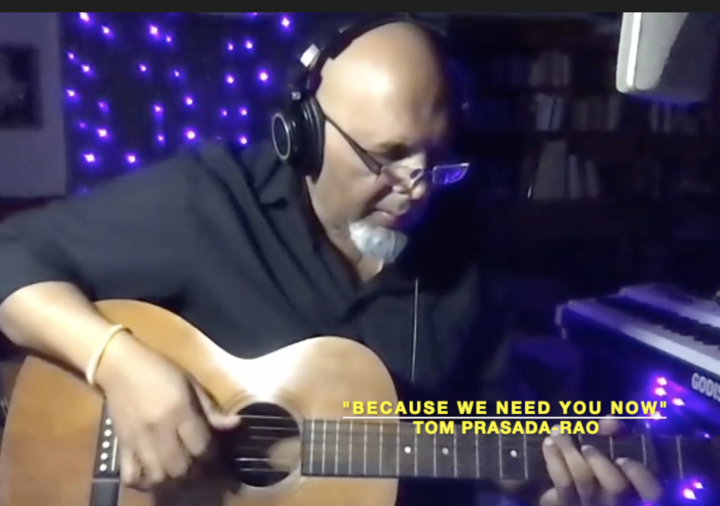 Welcome to 2021.
Sunday night I co-MCed the Greenwich Village Folk Festival with Ron Olesko of "Folk Music Notebook" -- it was a terrific lineup, starting with Terre Roche in NYC, ending with Roy Zimmerman in Northern California.  So many highlights, but THE highlight of the night to me was a song, "Because We Need You Now," that Cliff Eberhardt and Tom Prasada-Rao wrote together following Joe Biden being declared winner of the presidential election.
Tom sang the song solo.
It was bracing to hear this the same day we also got to hear recordings of the president trying to talk Georgia's Secretary of State Brad Raffensperger into 'recalculating' the election results.
Here's the link to Tom Prasada-Rao's performance, including his spoken introduction:

“Because We Need You Now” TOM PRASADA-RAO

“Because We Need You Now”

Life is not a horse race

it’s not win, place, or show

some people grab the brass ring

and why we’ll never know

some people seem to always win

and we’ll always wonder how

You can spin the wheel or roll the dice

or leave it up to Fate

but Fate will always trip you up

no matter what you say

the rules until they break

to see what the law allows

because we need you now

let us hear them chime

you were made for this moment

this moment in time

If you ever needed proof

that this day would come

look outside your window

see what we have done

every color of the rainbow

each race in the crowd

we’re all here because we’ve lost before

There were so many highlights in the evening -- but this one jumped out at me as a song that needs to be heard RIGHT NOW. Tom's so right -- Cliff recognized a moment in time that called out to be commemorated with such a well written, heartfelt song.
And as Tom says -- let's hope 2021 is a better year for all of us --
Onwards and upwards!
xoxox
Christine
p.s. There's also a version of the video with the words on the screen. If you are a performer, it's an easy way to learn this song -- you can see Tom's left hand on the neck -- the chords aren't difficult.
"Because We Need You Now" WITH LYRICS on screen: