My concert is sponsored by McCabe's Guitar Shop in Santa Monica, live on FB at 11 PM Eastern on Friday. The After Party on Zoom immediately follows at Midnight. Finally, something for your night owls! 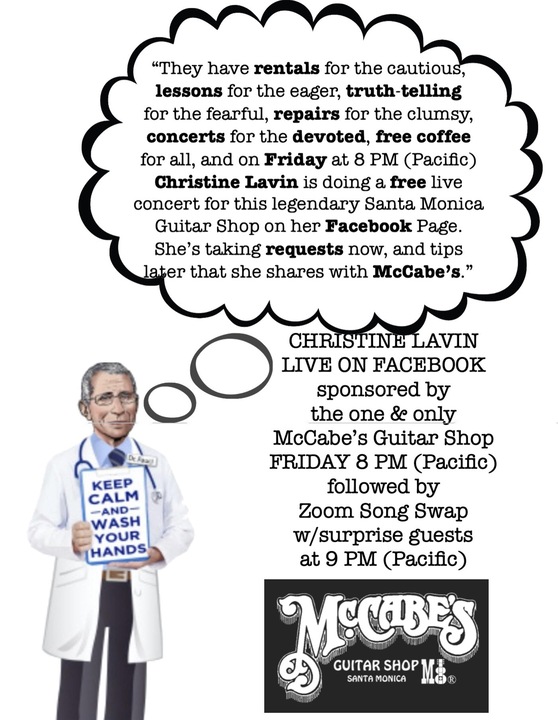 The After Party is limited to 100 participants -- so if this interests you, later this week the coordinates for the Zoom After Party will be part of my next newsletter -- it is never posted in public and most people won't get the info til the solo concert, but since you subscribe here, well, you gotta get something special for signing up! I ask you not post it anywhere (there's a problem of "zoom bombers" who come to disrupt our after party song circles, so it's a way to keep them out).

The two Midnight Zoom guests won't be announced until the day of the concert -- I can tell you they are both west coast performers, both at the top of their game, and I plan to make a 'highlight' video of the After Party and will email it to all who attend. For one of them it will be his first time online since the pandemic started, and he's debuting three brand new songs -- the other is a protege of his, so he'll be doing the intros for him (and it's someone else I'm a very big fan of).

My facebook page is facebook.com/christine.lavin.5 -- that's where the live concert will be streamed at 11 PM Eastern (8 PM Pacific). But it will also be at youtube -- I have a tech who coordinates all that, so I'm not sure of all the details, but he is.

I'm also in the final stages of mixing my new album -- guests on this album include Robin Batteau on violin, Amelia Krinke on viola, Steve Doyle on Bass, Brian Bauers on harmonies. Daniel Glass on percussion, with a special guest appearance by Joe Montano, an audiologist at Cornell Weill Medical Center in NYC. The song he is on also includes hearing test beeps. Can you see a pattern developing here?

Have a good week. Wear a mask, please.  And let me know if you have a request. Or a long socially distant dedication.