Join Don White and me in the chat room of a watch party for a show we did that was secretly filmed four years ago -- and yes, the secret filmmaker will be there, too -- 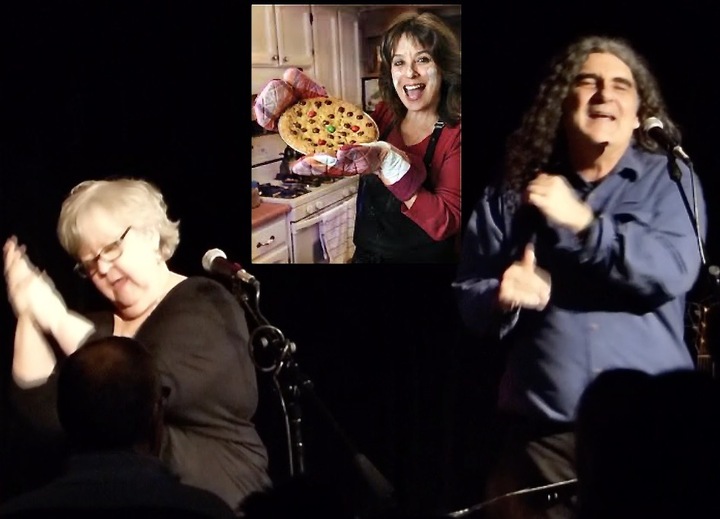 Next Sunday, July 19th, at 7:30 PM The Ark in Ann Arbor, Michigan is showing for the first time anywhere the film of a live show Don and I did on February 12, 2016 -- not knowing a camera was rolling. The sound is even better than the sound was that night since I was able to layer and synch up the house sound (that included the audience being miked) AND the sound off the soundboard, so the sound is crisp and clear and includes the wildly lively audience we had in the house. It's a free concert, with a virtual tip jar -- the money will be shared with The Ark, us, and our concert booking agents.

The link will be posted at www.theark.org (it's not up yet, but we want you to know, especially because of the pie contest). Immediately following the watch party, at 9:30 PM Eastern we are all switching over to a private zoom party (the zoom party link will be given out during the watch party). One of the audience members next Sunday night will be Karen Amarotico, who is famous in Oregon for her pies: https://pieadaygiveaway.com/about/

Knowing that Karen will be there, I'm challenging anyone who will be coming to the watch party to bake a pie for a pie contest that will follow it during the zoom party. Since we can't actually TASTE the pies, it will have to be a PIE BEAUTY CONTEST - which means - not that I'm trying to plant ideas of cheating -- the pie doesn't actually have to be edible, but LOOK editble. But if at the zoom party you can actually taste your pie and make yummy sounds, that would give real pies an advantage that fake pies won't have. Unless you're brave enough to taste a fake pie live on zoom and act like it's scrumptious.

We'll also invite some songwriting friends to drop in for an informal 'song swap' during the zoom party -- you never know who might show up. Think of it as music to eat pie by.

We'll come up with a suitable prize for the winner of the pie beauty contest. We will ask Karen Amarotico to be one of the judges so you know it's not 'fixed.' She's a pro, and it wouldn't be right if she was in the contest, but perfect for her to be a judge.

And now, ladies and gentlemen, it's time to preheat your ovens.