Latest album -- "On My Way To Hooterville"  10 new songs, one reworked from 45 years ago 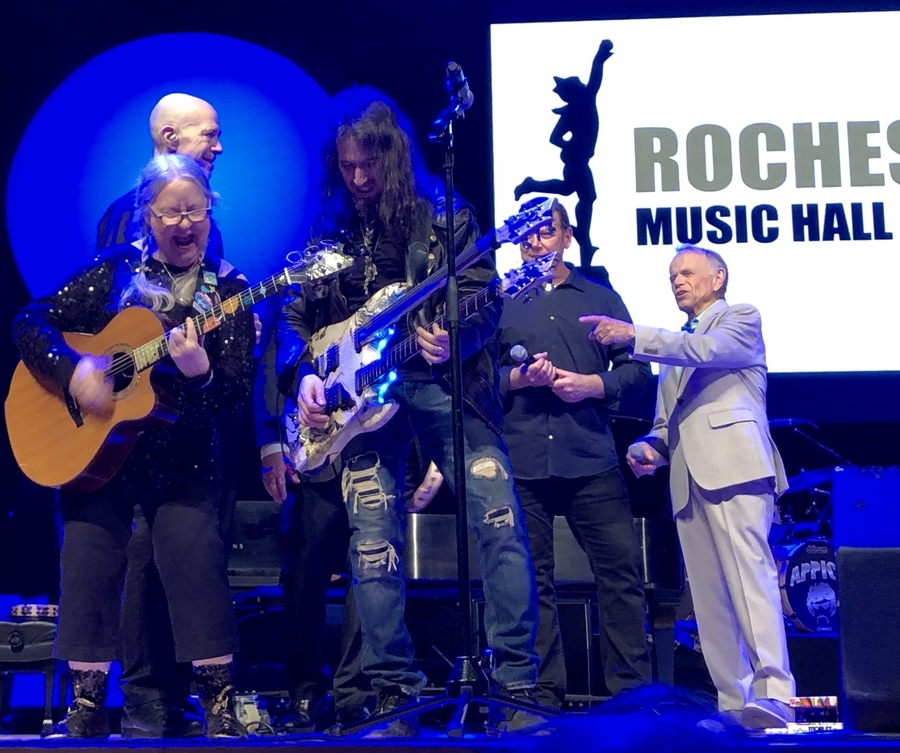 Christine Lavin started her professional life as a waitress/bread baker at the Caffe Lena in Saratoga Springs, NY in 1975 where she met Dave Van Ronk who encouraged her to study guitar with him in NYC. She took his advice and is now a singer/songwriter/guitarist/recording artist/author/videographer based in New York City. Her latest solo album, her 25th, ON MY WAY TO HOOTERVILLE, includes 10 new songs and one re-worked song, "Ramblin' Waltz," a re-telling of her time in 1975 when she was an entourage driver for the first week of Bob Dylan's iconic "Rolling Thunder Revue" tour.

HONORS AND AWARDS: In May 2021 Christine received an Honorary Doctorate in Fine Arts from her alma mater, the State University of New York at Brockport. In an odd twist, she has a younger brother also named Chris (born on Columbus Day) who also in May 2021 was awarded an Honorary Doctorate in Humane Letters from his alma mater, Hobart/William Smith Colleges in Geneva, NY.

What are the odds there would be two Chris Lavins from the same family to both be awarded honorary doctorates one week apart?

In September 2019 Christine spent a month at the artist retreat Yaddo in Saratoga Springs. Three of the songs she wrote there are included on her latest HOOTERVILLE album. In April 2019 she was inducted into the Rochester, NY Music Hall Of Fame along with Al Jardine of The Beach Boys. She received a 2012 Nightlife Award given annually to the best concert and cabaret performers in New York City. In November 2011 her book COLD PIZZA FOR BREAKFAST: A MEM-WHA?? (Tell Me Press, New Haven) won the 43rd Annual ASCAP Deems Taylor Award for excellence in writing about music. is available in paperback, kindle, and audio book formats, with the foreword written by actor/playwright/singer/songwriter Jeff Daniels. Christine has also won five ASCAP Composer Awards, The Kate Wolf Memorial Award, and her album Good Thing He Can't Read My Mind won Album Of The Year from the National Association Of Independent Record Distributors.

She has produced ten compilations, and so far these compilations have showcased songs of close to 100 songwriters whose work she admires. The food-themed compilation, ONE MEAT BALL, includes a 96-page cookbooklet that Christine edited — songs and recipes by Pete Seeger, Tom Paxton, Dave Van Ronk, and many more, including a surprise appearance by international gigastar Dame Edna.

For four years she hosted "Slipped Disks" on xm satellite radio, playing CDs slipped to her backstage by compatriots, and was occasion guest host for City Folk Sunday Supper on WFUV-FM at Fordham University. She also writes freelance for various publications (The Washington Post, Huffington Post, St. Petersburg Times, Performing Songwriter, and Delta "Sky" Magazine). Her song AMOEBA HOP is a science/music book by illustrator Betsy Franco Feeney (Puddle Jump Press), receiving the stamp of approval from The International Society of Protistologists, and a "Best Book Award" from The American Association for The Advancement of Science.

THE PLUTO FILES: THE RISE AND FALL OF AMERICA'S FAVORITE PLANET (W.W. Norton) by Neil deGrasse Tyson, head of the Hayden Planetarium in NYC, includes the complete lyrics to Christine's song "Planet X," which details Pluto's history and planetary status debate in rhyme. Neil included Christine in a live concert event at The Beacon Theater in NYC, "Comedians & Astronomers," and his voice is on that recording, her 23rd album, SPAGHETTIFICATION.

On A Winter’s Night, her first seasonal compilation project, (20 artists) became a four-artist national tour that first hit the road back in January 1991 and was a five-artist tour that hit the road November 2019, including Christine, Cliff Eberhardt, Patty Larkin, Cheryl Wheeler, and John Gorka -- only to be abruptly sidelined by the pandemic on March 12, 2020. The remainder of those dates across the US have been rescheduled for February/March 2022.

Christine was the keynote speaker in November 2016 at the annual North East Regional Folk Alliance Conference (NERFA) in Stamford, CT, and that keynote address has become the basis for her next book, which will take up where COLD PIZZA left off. She was also keynote speaker at the Lifespan National Caregivers Conference in 2017 in Huntsvile, Alabama.

Until November 2018, Ms. Lavin was very involved with the care of her aging mother in Geneva, NY. She relocated there twice, while continuing her full time performing in 2010 - 2012, and then again in 2016, to help out. She taught herself to make videos to help her mother remember daily events, having no short term memory. Soon she started making videos for her own music, and now videos for others. Her mother died in November 2018 at the age of 99, and her family cherishes those videos, which inadvertently spurred Ms. Lavin’s career on in an unexpected direction.

WHAT SHE IS WORKING ON RIGHT NOW

During much of the pandemic, Christine made ends meet by performing online concerts, writing and recording songs, creating videos for other artists, and selling her books and CDs from her website (she is the president, secretary, messenger, and complaint department of her record company, while becoming friends with all the window clerks at her Lower East Side post office). For most of her online concerts she asked for requests, and many of her fans asked for songs she hadn't performed in years. Much to their delight, she went about re-learning many of them, and is working on a theatrical presentation of her songs.

Christine Lavin has been called "A fearless folkZinger!" by the Orlando Sentinel, "Wildly entertaining," by The New Yorker, and "A fresh kick in the pants!" by the late Paul Newman. She is currently also working on her 26th solo album.

On September 1, 2021 her song, “The Best Summer,” inspired NYT columnist Jennifer Finney Boylan to write an entire column sparked by that song.

“The Best Summer” by Christine Lavin