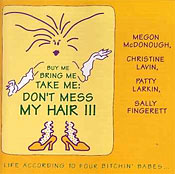 VISIT FOURBITCHINBABES.COM THEY HAVE ALBUMS, AND SO DOES iTUNES. I DON'T ANYMORE!

In 1990 Christine Lavin invited three singer/songwriters, Megon McDonough, Sally Fingerett, and Patty Larkin, to join her for a group concert project. Naming themselves the Four Bitchin' Babes, they quickly acquired many fans with their music, humor, innovative shows, and chemistry with each other and their audiences. "Live At The Birchmere" was the Babes' first album, spotlighting the talents of each member of the group as well as their ease at working together as an ensemble, and demonstrating why Four Bitchin' Babes shows have been described as "travelling pajama parties." Also called "Traveling Pillsburys."

Note to all you collectors: On the cassette of this project 'live at the Birchmere' was misspelled -- says "Live at the Bichmere" -- if you find one of those, save it for The Antiques Road Show!