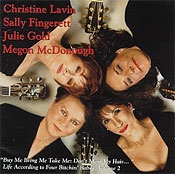 VISIT FOURBITCHINBABES.COM. THEY HAVE ALBUMS, AND SO DOES iTUNES. I DON'T ANYMORE!

The Babes' second album was recorded in a studio, and features singer/songwriter Julie Gold, who replaced Patty Larkin as the fourth Babe in 1992, before Julie's song, "From A Distance" became a Grammy-winning megahit. On this album, each Babe sings some of her best solo material, backed up in tight harmonies by the other three members of the group. Sally and Megon on piano and guitar, Julie on piano, and Christine on guitar, all demonstrate their remarkable abilities as musicians and as witty and insightful songwriters.

On Christine's song "Bald Headed Men" many people wonder what the hell is that percussion sound? It was around 3 am when producer Steve Rosenthal got what he wanted -- the sound of a knife tapping a half-full (half-empty? No, half-full) glass pot of coffee. On Julie's song "Good Night New York" it's Michael Bacon on cello -- yes, Kevin's brother, so take that all of you playing Six Degrees.