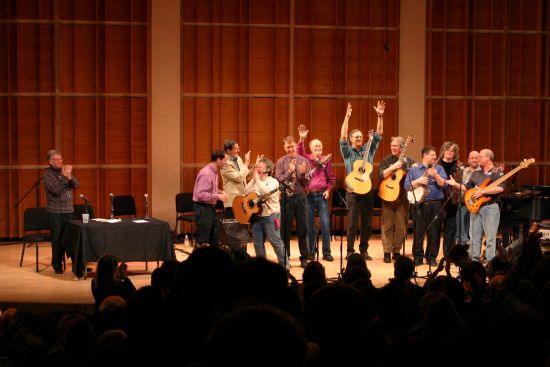 This photo is in the book, but is small and not easy to see -- here it is again.  It documents the story in Chapter Two about a concert at Lincoln Center where Odetta and Oscar Brand were last minute cancellations, and a new young songwriter named Garry Novikoff came onstage and brought the house down with a song he sang while playing piano -- and he had never played it on piano before.  At the end of the concert Pete Seeger himself invited Garry to join us for the finale -- and there he is in the purple shirt, joining radio host Bob Sherman, Garry Novikoff, Doug Mishkin, CL, Mark Murphy, James Durst, Pete Seeger, Tom Chapin, Michael Mark, John Cobert, Martha Sandefer.  David, James, Mark and Martha are the group Work O The Weavers.