Fax It! Charge It! Don't Ask Me What's for Dinner! 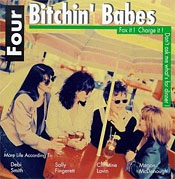 VISIT FOURBITCHINBABES.COM - THEY HAVE ALBUMS. AND SO DOES iTUNES. BUT I DON'T ANYMORE!

On this studio album, Debi Smith adds her lovely voice and talent on guitar and bodhran (Irish drum) to the Babes, replacing Julie Gold as the group's fourth member. Since they began in 1990, the Babes' popularity has continued to grow, with frequently sold-out shows and three popular albums. (Christine Lavin left the Babes in 1997 and was replaced by Camille West.) Here Christine, Sally, Megon, and Debi each contribute their funny, thoughtful, and sometimes skewed views of everyday life. Each woman has her own distinctive musical style; Christine's is comedic and narrative; Megon sings equally well in jazz, folk, and country styles; Sally's soaring melodies lend themselves to her skill as a concert-style pianist; and Debi effectively adds guitar and the dramatic bodhran to her Nashville and bluegrass sound. Yet they are able to blend their styles into complex and clever arrangements, the lead singer backed by harmonies from the others.

This cover photo was snapped on the fly -- the girls were taking a break from recording in Columbus, Ohio, went looking for a place to eat, saw this outdoor cafe, literally hopped the fence, sat down and called both a waitress and a photographer (Irene Young). The rest is history.

"How can funny sound this pretty?" -Scott Alarik, Boston Globe