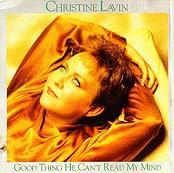 CHRISTINE HERE -- I never sounded like Joni Mitchell, so that's a stretch but what a lovely compliment.  And just for the record, I was wearing $250 worth of makeup and had $500 worth of retouching done on that album cover photo. I NEVER LOOKED LIKE THIS. I posed for TEN HOURS and there was NO FOOD at the photog's studio.  I was so hungry when it was all over that I ran to the Pizza Joint as soon as I got home.  I still had all that makeup on and Hector, one of my favorite pizza men, said, "Christine! What hoppen to you?  You like a clown!"  Show biz.