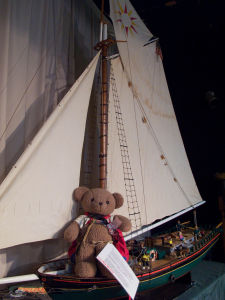 WAY BACK LAST CENTURY . . . in June 1995, Jingles the teddy bear started traveling and collecting jokes for children.  He's been on vacation for awhile, but HE'S BACK!  On April 11th he came to my concert at the Clearwater Walkabout, and audience member Jon Marsh snapped his photo trying to stowaway on the replica of the Clearwater which was onstage.

Obviously, Jingles' plan was thwarted -- not only was he photographed sneaking onboard, he didn't realize the Clearwater was in drydock and that he was too big to fit in the lifeboat he planned to hide in!

Jingles plans to visit more shows -- but probably only the ones where I'm not flying (the airlines charge so much extra when your suitcase is over 50 pounds!).  If you are coming to my show, please visit Jingles and add more jokes to his book -- his first book is filled completely so now he has a second book that is quickly filling up.  And bring your camera and take his picture with you, or doing something unusual (like the one here).  Thank you Jon Marsh for snapping this photo and sending it to me. -- Christine
p.s. If you want to add jokes to Jingles' book but won't be at a show, add a joke here!