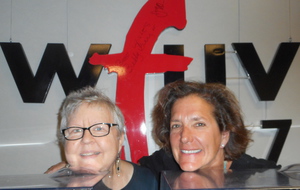 Starting on Monday August 18th for two weeks it will be available at the archives (BUT ONLY FOR TWO WEEKS) under “The Sunday Breakfast August 17, 2014” here: Click to hear Christine Lavin sit in for John Platt on WFUV


I Built A Boat – © Laura Smith, SOCAN
Laura Smith
Her recording of “My Bonny” has become a standard north of the border.   She is a Canadian national treasure:
My Bonny

“I Go With You” was inspired by a painting by Chris Pelletiere, so it was a perfect match -- a video for this song featuring paintings by Chris Pelletiere.  His wife, Marcia Pelletiere, one of the members of the 8-voice award winning a cappella group “The Accidentals,” created this video.  Make sure you read Nikki’s notes on the video page.  She’s just starting out, and she’s got the goods.

I Go With You video

How To Get The Kids To Move Out* – 10:19 © Don White, Lumperboy Music, SESAC  What more can I say about Don White?  If you have kids, you MUST listen to this and take this advice to heart.  Audiences LOVE this guy.  Deservedly so.
Don White

Roscoe* – Julie Gold, Words and Music By Julie Gold
BMI  2013 Julie Gold Music Publishing
Administered World Wide by Modern Works Publishing.
Roscoe is legendary in NYC.  Let’s pray he never comes to YOUR apartment.  Julie will be the live guest in the third hour of this program.  Don’t miss this interview.  She will be giving us a sneak peak at her book, a work-in-progress.

And yes, that is the voice of Emily Bindiger of The Accidentals you hear singing all those amazing harmony parts on this song.  AND Emily produced this track.  How talented can one person be???? The Accidentals


MUSIC FROM THE TUCSON AREA:

Knitting* by © Robyn Landis, BMI Robyn Landis
If you are a knitter, send Robyn or me HI RES photos of you showing off your work.  We are making a video for this song, which will be on an album that will be out in the fall.

I Keep On Keepin’ On © Jimmy Webb, EMI Music Publishing, ASCAP – The Contessas on  the TV show “Shivaree”
NOTE:  Terri Garr was one of the Shivaree Dancers.  Here’s a video of The Contessas singing the A-side of that single, “This Is Where I Came In,” written by Jimmy Webb.  Can anyone tell which dancer is Terri?
Contessas On Shivaree

I went through more than 400 different versions of the song “By The Time I Get To Phoenix” to make this unique mashup.  All three here – The Western Continentals, Jim Hudak, and Susie Arioli – I was not familiar with, but have tracked them down online.  All three are worth exploring; their information is below.

By The Time I Get To Phoenix  © Jimmy Webb, EMI Music Publishing, ASCAP, sung by The Western Continentals, Jim Hudak, and the Susie Arioli Band.

I tracked down and spoke by phone to Curt Kimball, the original tenor of the “Western Continentals.”  He is a retired surgeon, lives in Colorado, and one of his hobbies is restoring vintage radios, so it’s appropriate that WFUV is airing the “vintage sound” of this barbershop quartet.

Later this year the Western Continentals are having a 50th anniversary reunion – a number of different singers were in the group over the years.  When I told Curt they’d be getting airplay in NYC on Sunday, he was tickled pink – even though he is not the tenor on this particular recording.  He was the original tenor, got drafted by the Army, went to Vietnam, and was replaced by tenor Al Mau.  The others on this recording with Al are Ted Bradshaw, Paul Graham, and Phil Foote.

Jim Hudak, pianist, is new to me, too. You can learn more about him at  Jim Hudak.  He has a beautiful posting about Jesse Winchester on his site – I know you’ll like it.  Hope to cross paths with him one of these days.

Susie Arioli is a jazz singer based in Montreal Susie Arioli.  This was probably the 200th version of “By The Time I Get To Phoenix” that I listened to – and it jumped out at me.  Here’s a video that gives you a lot of information about Susie, who sings both in English and in French: Susie Arioli video


Classic Heart –  © Evan Olson, Evan Olsongs, BMI
Yes!  This is the world debut of this song and it IS at iTunes.  Be the first on your block to own a copy of this song.  Let’s make it go viral:

Here’s a whole other side of Evan: Evan Olson Cuts Loose

I met Evan and Jessica Mashburn at Jim Caruso’s Cast Party at Birdland one Monday night not long ago.  She is the girl with the classic heart, and plays piano on this recording.  God bless Jim Caruso for creating a place where singers, songwriters, and the people who love them get to meet and mingle every week. Jim Caruso's Cast Party  And always a big thank you to Gianni Valenti, owner of Birdland (315 West 44th Street, between 8th-9th Avenue; great food, too).


Happy 95th birthday to my Mom, Jody Crawford Lavin My Mom's advice for how YOU can live to be 95!
Homegrown Tomatoes  © Guy Clark, EMI Music Publishing, sung here by Muzzie Braun

Shout out to Ervin & Edith Drake in Great Neck!

My sister-in-law Gina Garcia translated her song for you:

Sleep with you and wake up to your voice
the first sound I can hear
and caress without touching you
with just a whisper
I love you with all of your colors,
contrasts and shades
with the eternal mystery of your being

I love you, you have my love
a heart with you and another heart inside me
again I feel and imagine that
in an embrace our bodies merge
you are that half my soul is missing

Sleep with you and wake up to your voice
the first sound I can hear
and caress without touching you,
with just a whisper
I love you with all of your colors,
contrasts and shades
with the eternal mystery of your being

I love you in all of your moments
even if the wind changed direction
my love would not change
I love you, you have my love,
with you a heart
and another heart in me beating for you

I first met Marcela singing on the downtown platform of the #1 train at 103rd Street and Broadway.  She is from Peru.  Look for her next time you ride the subway in NYC.  That moment I saw her – I just caught her singing ONE note – held it out for a long time, ending a song, and everyone on the platform applauded.  I never saw that happen before.  I quickly bought her homemade CD and hopped on the train.

A couple weeks later I bumped into Marcela again, and again she was finishing up for the day – she was packing up her gear, and gathering the money that had been thrown into her case that afternoon.

Then this other young musician named Ilana Herst showed up and asked if she could take over Marcela’s spot (Marcela doesn’t speak English, so we all made sign language and Marcela nodded that she was done for the day).

I asked Ilana to sing me a quick song (to see if I could include her in the broadcast), so she whipped out her guitar and started singing.  Marcela was still packing up, stopped to listen, and then walked over and put a dollar in Ilana’s open case.  Sweet!

Gina translated this, too:

Ilana is new to New York – from Chicago.  She writes: “I play my music around the Upper West Side, usually with a recognizable blue bucket placed in front of me to collect the change. Sometimes another musician plays with me, her name is Sharona Balk and her videos can be found on youtube. I'm still learning my way around the music scene of this city, so no gigs yet, but soon I hope!”

You never know what you’ll see when you ride a NYC subway.  I wish both Marcela and Ilana the best of luck!


Hallelujah* © Leonard Cohen, Sony/ATV Publishing
sung by the teen quartet Still Saffire in a show at The Turning Point in Piermont, NY in 2012.  The two oldest members of the group are now in college, so they are on hiatus, but Annika, now 16, is working solo:

Annika has also found her to way to Jim Caruso’s Cast Party at Birdland on Monday nights – they love her!   In June she won the Audience Choice Award at WNYC’s Battle of the Boroughs.
Annika
Still Saffire


Julie Gold live interview will include readings from her book-in-progress:

GOD, CATS and a VANDALIZED CAR . . .
(I Am Gathering Stories)

Various artists have performed or recorded their renditions of the song, including the likes of Bon Jovi and Emmylou Harris, who performed it as part of a medley with the Nanci Griffith song "It's a Hard Life Wherever You Go" on her 1992 At the Ryman concert recording.

‘Snoopy vs. The Red Baron’ was also written by Dick Holler, and was the surprise multi-million selling smash hit of 1966. Only the Beatles 'Nowhere Man' and 'Paperback Writer' entered the Billboard charts at a higher position. Recorded by The Royal Guardsmen, it spent four weeks at number 2 on the Hot 100 singles charts.

Julie Gold reads the story “David Sanborn”
“Across The Universe” by The Beatles
© Sony ATV Tunes LLC
Beatle Love* by Megon McDonough, © Eagle Woman Music, ASCAP, from the show-in-development:  HOW RINGO SAVED ME FROM A LIFE IN THE CONVENT  by Megon McDonough


END – THANK YOU, PHIL KLUM FOR MASTERING ALL THE UNRELEASED MATERIAL Phillip Klum Mastering – PLUS JOHN PLATT, FOR GIVING ME THIS OPPORTUNITY TO GUEST HOST, AND JEREMY RAINER FOR ENGINEERING.  Good luck to Julie Gold with her book!  I love what I've read so far.

As my friend Joan Crowe says -- Seize the day . . . but go out at night.  Almost all of the performers on today's show can be found doing live concerts all across the US and Canada.  Go to their shows!  We can't do this without you.

Have a great Sunday –

CHRISTINE & DON: TOGETHER AT LAST

ONE MEAT BALL THE CD AND COOKBOOKLET