I Was In Love With A Difficult Man 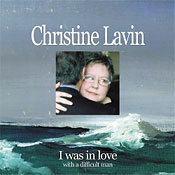 I Was In Love With A Difficult Man is Christine's work that she calls her "dream album." The title cut is a bouncy reminiscence of a type of man nearly all women are familiar with. As Christine puts it, "If you are a woman you are probably thinking 'been there /done that' - if you are a difficult man you are probably thinking 'more proof that chicks dig us.'" The album also includes a rare recording of her favorite actress, Pat Crawford Brown, also known as Aunt Patsy -- a poem she wrote that precedes the song Something Beautiful, about her Aunt Carolyn, a wonderful painter. Her ocean painting is on the cover, and the package was designed by Carolyn's daughter, Maureen Bennett O'Connor.

UPDATE: My Aunt Patsy died on July 2, 2019, the day before my "BEST OF" album was mastered, which contains a new remastered version of this song. Aunt Patsy was in "Sister Act" (both I and II), "Norbit," "Romy & Michele's High School Reunion" (she is the waitress at the diner who asks them why kind of business they are in). Aunt Patsy liked to say that her film and TV work supported her "theater habit."

The song Firehouse is her post-911 tribute to the brave men of Ladder 25 in NYC -- the ones who lost their lives, the ones who carry on.

Album produced by Steve Rosenthal, recorded at The Magic Shop in NYC.