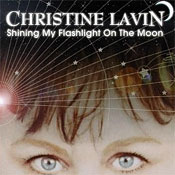 Since this album was released, "Planet X" took on a life of its own and the lyrics of that song have just been published in the book THE PLUTO FILES written by Neil deGrasse Tyson, director of New York's Hayden Planetarium [it is written up in the 'Books' section of this website, with a link to Amazon if you want to expand your scientific knowledge]. A live performance of this song, introduced by Neil deGrasse Tyson himself, is on Christine's 23rd solo album, SPAGHETTIFICATION, which is still in print and is also available at iTUNES.