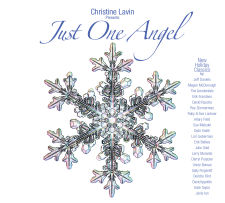 FIRST REVIEW OF THIS CD 22 top American singer/songwriters -- Christmas/Hanukah/Solstice/New Year's songs.  This is quite an eclectic collection -- from the reverent to the irreverent.  Award-winning actor/singer/songwriter Jeff Daniels kicks off the album with a song told from the point of view of a young man who has a few things he wants to discuss with Santa Claus about past disappointments.  It's followed by a haunting song by Megon McDonough about getting her very first guitar one Christmas -- there will be photos accompanying all of this at this website (under construction) -- Meg actually found a photo of her as a little kid beaming, holding the enormous Christmas guitar.  That song is followed by the National Harmony Sweepstakes-winning a cappella group "The Accidentals" singing the vocally thrilling  "I'm Not Going Home For Christmas," followed by the brilliant Erik Frandsen singing his "Christmas In Brooklyn," which is sure to become a favorite for everyone who has ever lived in or visited or even heard of that borough.

Gene Shay, the Dean of American Folk DJs says: PERFECT!  OFF THE WALL OR UNDER THE TREE, THE GREATEST SELECTION OF HOLIDAY SONGS THIS SIDE OF THE NORTH POLE!"

This whole collection is 78-1/2 minutes long, with no dead air between tracks, so you can put this on as you drive or wrap presents -- and yes, there are Hanukah songs here, including a song I have been waiting for for almost 20 years.  Sally Fingerett, one of the founding members of "The Four Bitchin' Babes, was born on Christmas Day.  And she's Jewish.  She's finally put pen to paper and written a talking blues song about what that feels like.  I've never heard a song quite like that, and here it is, for the first time ever.

My song is a dream come true for me -- I wrote it as a 'duet' for The Accidentals and I to sing together -- a song about what it's like to be single at Christmastime.  We single people need a song like this!  Finally, here it is.