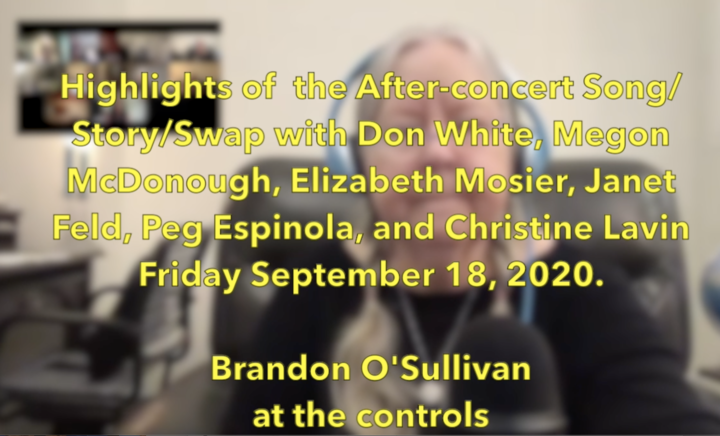 Some you might know - Megon McDonough was in the Four Bitchin' Babes, Don White and I did shows together for 9 years, but Peg Espinola is an octogenarian folksinger who didn't start writing songs til she was 67, Janet Feld has been teaching adults how to play guitar for 20 years at the Passim school of music in Cambridge, MA, and Elizabeth Mosier is a non-fiction writer I met last year when I spent a month at the artist retreat, Yaddo, in Saratoga Springs.

During this pandemic I try to make my concerts a way for you to discover the work of other artists whose work I think you will love.

A very strange thing happened during the party. Just after I introduced Peg Espinola, my screen went black. No warning, just turned off. I searched around to see what could be wrong and saw that it had become unplugged. I frantically plugged it back in, but then had to wait for it to re-boot since the power reserve had gone to zero -- and when it finally did re-boot, a couple minutes had passed and all the pages that had been open before were all suddenly open again, including the front page of the NYTimes.

That's when I saw the headline about RBG. I finally rejoined the Zoom After Party just as Peg ended her song, and it took me a few seconds to get my bearings. I finally popped back on the screen, apologized for missing her song completely, and wondered if I should say something about the headline I just read. For a second I thought maybe I had dreamed it, that it wasn't real. But we were live, in real time, so I decided I would. I'm no actress. I don't know how to "act" calm when my heart is pumping a hundred miles an hour. So I told them.