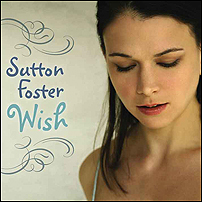 Sutton played Janet VanDeGraffe, the bride, in THE DROWSY CHAPERONE.  She was "Inga" in YOUNG FRANKENSTEIN, then "Princess Fiona" in SHREK THE MUSICAL.  She is the prototype of the contemporary Broadway performer - she can sing anything, is a fabulous dancer, and wow, can she act.  I saw her recently on "Law & Order" -- no singing, no dancing -- but she was mesmerizing.

Sutton will be starring in a brand new production of Anything Goes opening on Broadway in March 2011 at the Stephen Sondheim Theater (where Pee Wee Herman's show was -- a lovely theater).