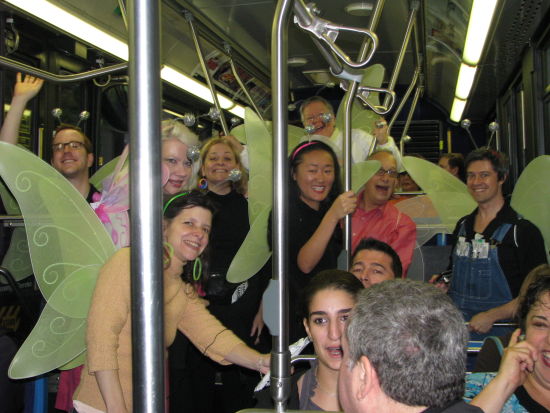 On the way to the Greenwich Village Halloween Parade

With a bunch of friends we went as the lightning bug brigade.  See Robert J. Martin, on the right, with the extra light sticks in his overalls?  He's married to Kevin Scott Collins, all the way to the left (red hair, glasses, antennae).  There's also Jenny Lynn Stewart, Katie Zellner, Kathy Romano from sign language class, Kevin and Robert's friend who I just met that night (Emily Santamore), that's Australian Rick Susman in the pinkish reddish shirt, had never celebrated Halloween before in his entire life.  I'm at the back of the bus - my head just sticking up.  It rained like crazy that night, we got so drenched we had to go back to Julie Sheinman's apartment to dry our clothes, so we had no way of knowing . . . but this was bus ride was the highlight of the parade.  Julie's place was the highlight of the day.