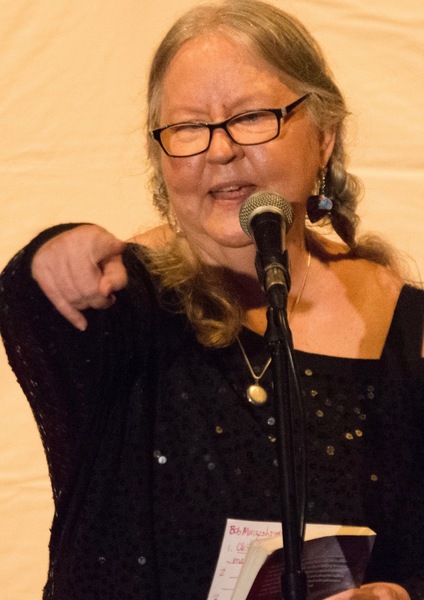 Also thank you to:
Jeremy Rainer at the controls.
Mastering engineer Phil Klum for mastering and re-mastering some of the tracks you will hear, making them radio-ready for this broadcast.
Falcon Ridge Lounge Stage engineer Scott Jones for recording Greg Klyma last year at Falcon Ridge's Lounge Stage.
Recording engineer Rich Lamb for mixing Nicole Zuraitis’ track for this broadcast.
Radio consultants Eileen and Allan Pepper.
And to all the singer/songwriters on this broadcast for writing such good music, and of course to all the listeners like you who contribute to this fine radio station.  If you’re not a member of WFUV, now’s a good time to join, and a sweet way to send your good cheer and show your support for John Platt.

6.  Susan Cattaneo “When Love Goes Right” 4:23 from the album HAMMER AND HEART
Susan says, "The duet is with Bill Kirchen (who is also my cowriter on the song). He is known as the Titan of the Telecaster and was part of Commander Cody and the Lost Airmen. www.susancattaneo.com

9.  Brooklyn Bridge by Steven Blane - unreleased
Here's a link to my site: www.stevenblane.com. Everything you need to know is there!  Check out my recently released album, Motel Blue! And my recent albums: "I Confess" recorded in Nashville and "The Shed Sessions" recorded in a shed in Lake Worth, Florida :-)
I'm also a Rabbi with an online synagogue. Here's a link to my Rabbi site. Join me online for Shabbat Services.

Could’ve Been Us - Jordi Baizan - unreleased
www.jordibaizan.com
Jordi is going into the studio with Walt Wilkins to produce his second record to be released in the spring of next year. Following the release of the record in April, Jordi will be touring the US, Canada, and Western Europe for two years.
Aug 18 - House concert, Houston TX
September 26-29 Southwest Regional Folk Alliance
Oct 14 - Cypress, TX

The song is brand spanking new and will be on my next release -  date tbd. My latest cd is ‘MORE’ and it’s on Catherine The Great records. My next gig will be Sept 8th at the Hudson West Folk Fest with my band VickiKristinaBarcelona.
www.terryradigan.com Be on the lookout for the “Radigan Roundup” starting up again this fall at the 12th Street Bar & Grill in Park Slope, Brooklyn - the 1st and 3rd Sundays of the month.

Richard Boulger — indy single,  It was inspired after I heard a student at the school I had led the band program had been shot and killed.
www.richardboulgermusic.com/new-tracks

Contact Richard at: www.richardboulgermusic.com
for more information on the track and artist.

Jazz day camp in the Berkshires next week:
m.youtube.com/watch?v=0VX3vHPrLrU

14.  I Like You A Latte - Nicole Zuraitis (aka “Nicole Z”) unreleased  www.nicolezmusic.com
Nicole writes, “When we moved to the city back in 2009, separately, i was a nanny and dan pugach was a barista at aroma espresso bar in midtown. he would wake up at ungodly hours and make people cappucinos and developed a love for coffee.  needless to say that when we began dating i got to reap the benefits of this new coffee love even after he was able to quit barista to be a full time drummer, and i was able to quit being a nanny to be a full time singer/pianist.  i wrote him this song after i found out there was a new competition called "the coffee music project" coming from London to NYC which was a songwriting contest and a fundraiser to bring clean water to coffee growing communities globally.  one of the criteria for the contest was to write a song involving "coffee" somehow....and i took it to a new level by writing this deeply backwards albeit sweet dedication to my former barista, now husband, called ‘The Coffee Song.’ And we won the competition!”
August 14th: Generations of Her Women Songwriters and
Lyricists at the Cell in NYC
August 16th Harbor Jazz Festival in Long Island with the
Dan Pugach Nonet
August 30th: Smalls Jazz Club NYC
August 31st: Birdland Jazz Club with the Birdland Big Band NYC

19.  One by One — Lauren Pratt 4:19 from the album
DAYS LIKE TONIGHT www.laurenprattmusic.com
Sept 14, North Adams, MA
Sept 15, North Adams, MA Lauren is named as a 2018 Finalist for the No Depression Singer-Songwriter Award; the final round will be held at the FreshGrass music Festival in North Adams, MA. Congratulations to the other finalists, Clint Alphin, Caroline Cotter, and Heather Aubrey Lloyd (Heather is also on this radio show — her song is coming up — small world)!

20.  Singing My Heart Out — Louise Mosrie 2:53 from the album
LAY IT DOWN www.louisemosrie.com
Cliff Eberhardt and I will be at the Washington Square Hotel in NYC on Sunday, Oct 7th with Richard Barone hosting. :)
We're in FL for half of Sept ember (as Cliff Eberhardt w/special guest Louise Mosrie) at:
September 6: Radio Live in Pensacola
September 7: Big Lagoon State Park in Pensacola
September 8: Labyrinth Cafe in Ft. Lauderdale
September 14: Craftsman House in St. Pete
September 15: ACMA (Americana Community Music Assn.)
in Ft. Myers

25.  I Ought To Know - The Malvinas 3:54 from the album GOD BLESS THE GRASS, www.themalvinas.com (song written by the late Jack Hardy)
The Malvinas are Gina Forsyth, Lisa Markley, and Beth Cahill
August 24, Music on the Square, Jonesborough, TN
August 25, Studio One, University of Eastern TN

31.  The Color Of Roses - Beth Nielsen Chapman 4:50 from the album SAND AND WATER www.bethnielsenchapman.com
Aug 8, Edinburgh, Scotland The Queens Hall
September 11, Nashville, TN Nashville Public Library
[Don’t forget to google Tara Lipinski and The Color Of Roses to see her skate to that song]

33.  Sum Of All Things - Genevieve 4:01 (unreleased — will be on an album next year on Late Shift Records)
www.genevieve-music.com
I'm performing at the Madison Farmers Market (Madison, NJ) on August 9th, Four Sisters Winery (Belvidere, NJ) on August 10th, Rock on Radio on August 12th, World Cafe on August 18th, and Spilling the Tea with Jonathan Tea at Clancy's Tavern in Neptune, NJ on August 30th.

34.  Threnody - Safe As Houses 3:12 from the album
LUCKY LUCKY  www.safeashouses.ca
Two odd words in this song:
threnody: a song of lamentation
tamponade: a condition in which the heart is compressed because of the accumulation of fluid in the pericardium
Aug 6, Union Summer at Union Station, Toronto, CA

39.  Fields Of America - Rupert Wates 2:45
from the album: THE LIGHTS OF PARIS
My upcoming gigs: a three month tour of the US, beginning August 9 and including California, Oregon, New Mexico, Missouri, Kansas, Nebraska, Iowa, Michigan and Illinois, returning to New York City in the first week of October.  All dates at www.rupertwatesmusic.com

Thank you to:
John Platt, host
Jeremy Rainer at the controls
Mastering engineer Phil Klum, www.phillipklummastering.com
Falcon Ridge Lounge Stage engineer Scott Jones
Recording engineer Rich Lamb
Radio consultants: Eileen and Allan Pepper
And to all the singer/songwriters on this broadcast for writing such good music. And of course to all the listeners like you who contribute to this fine radio station.  If you’re not a member of WFUV, now’s a good time to join and a sweet way to send good wishes to John Platt.