It was April 2, 2000; Memphis, TN.  I produced a tiny local PBS special called Woody & Me, a musical tribute to Woody Guthrie. Oscar Brand wrote the script, and as the cameras rolled, he shocked us all by throwing in an unscripted little known Woody Guthrie Hanukah song that Woody wrote after marrying Marjorie Mazia Guthrie. Oscar sang "How many latkes can you eat on Hanukah, how many women can you kiss on Hanukkah?" and Tom Paxton, Richie Havens, Ramblin' Jack Elliott, Odetta, and Josh White Jr. sang an impromptu response.  To use the often repeated phrase of my grandma, it was at that time I knew the Jewish people had arrived in America.

Bruce Newman is an entertainment attorney and CPA in Memphis, where much of his practice is related to the representation of the arts and entertainment community. He is currently a Recording Academy Board Member.  He is originally from New York City and moved to Tennessee in 1989.  Since then, he has served on many non-profit boards and has produced a number of musical events and shows. 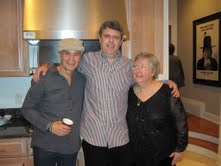